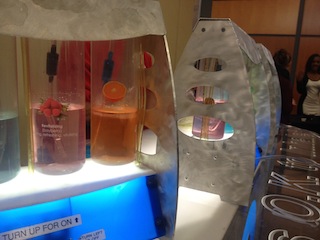 The Oxygen Bar at the "Unlock the Zen Through Your Five Senses" event.

The “Stress Less” Week, hosted by Active Minds, began December 1 with the “Unlock the Zen Through Your Five Senses” event, which gave students a wide array of experiences in taste, smell, and touch in order to de-stress as we approach finals week. The event took place from 11 am to 3 pm in the Student Center Ballroom and featured four stations.

When students first entered the event, they were given a small capsule that dissolved in the mouth and altered the taste buds. The first station urged students to try a variety of fruits – lemons, limes, grapes, and melons. The capsule had reacted so that the lemons and limes both tasted quite sweet, and it enhanced the sweetness of the other fruits that were provided. Savory taste complements – hot sauce, vinegar, pickles, and peppers, were then given. The capsule that had dissolved in the taster’s mouth ensured that these seemingly intense flavors were mellowed, and the heat of the hot sauce and peppers were nearly eliminated.

The oxygen bar was the next stop in the event, where students were advised to take very deep breaths as they were given disposable plastic tubes that reached from the nose to the oxygen machine. Each student was given a choice of four scents, labeled with titles such as “relaxation” and “energizing.”

As the experiences came to a close, students were given the option of taking a free stress ball, or to create their own. There were different colors and sizes so that each student could take the stress ball that fit best with their needs.

“Stress Less” Week has just began here at Parkside - from 12 pm to 1 pm on Wednesday, Active Minds is hosting a free event to demonstrate how to create your own stress ball on the bridge. Keep a close eye out for these Real Amazing events here at Parkside, and remember, Stress Less for finals week!