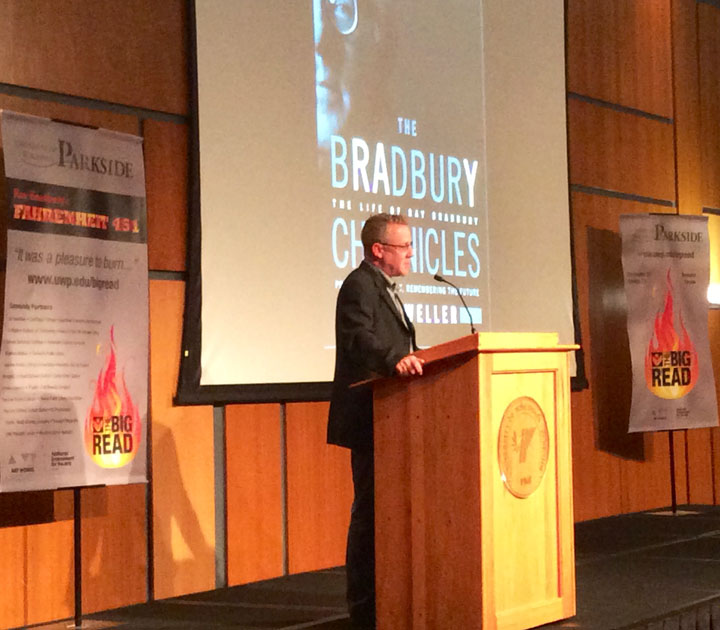 The classic dystopian novel "Fahrenheit 451" and the life of its author, Ray Bradbury, drew more than 300 persons to UW-Parkside Wednesday evening. Bradbury's authorized biographer, Sam Weller, spoke of Bradbury's commitment to writing, his love of books, and the surprising first publication of "Fahrenheit 451."

When Bradbury completed what is arguably his most well-known work, no one wanted to publish the book given the controversial topic and the political climate of the early 1950s.

"No one would touch ('Fahrenheit 451')," Weller said. No one, that is, except a young editor with a new magazine in Chicago. Hugh Hefner published the full version of "Fahrenheit 451" in the first edition of Playboy. Hughes was trying to push the boundaries of the time with Playboy, Weller said, and Bradbury's book was a perfect fit.

UW-Parkside Library Director Jo Cates said "Fahrenheit 451" was the clear choice for the Big Read, a celebration of reading. "The book speaks loudly to the campus and to our community," Cates said. The UW-Parkside Library, in collaboration with the Kenosha and Racine public libraries, received a Big Read grant from the National Endowment for the Arts.

According to Weller, Bradbury often said that an educated and well-read society is central to the concept to democracy. "Events like the Big Read stand up to what Bradbury warned us about," Weller said.

Weller first interviewed Bradbury, who was born in Waukegan, Ill., for an article in the Chicago Tribune. The first interview lasted six hours, Weller said, and Bradbury continued to invite him to his home in California after the article appeared.

As a young man in the 1930s, Bradbury saw a movie theatre newsreel showing Hitler's army burning books in Berlin. Bradbury first wondered why a military would burn books. He soon realized, Weller said, that books empower us, and bolster us as a society.

Bradbury's most popular work was first titled "The Fireman," which the author thought was a bit dull. That led Bradbury to discovering at what temperature book paper burns. Many calls, including one to the chemistry department at UCLA, turned up no definitive answer. Bradbury finally contacted … the fire department and learned the temperature was 451 degrees Fahrenheit.