Insects can tell us a lot about the health of our natural environments, but with advances in molecular biology and state-of-the-art instrumentation they are beginning to tell us even more. Rachel Mutchler (Molecular Biology and Bioinformatics major, 2020) and her research advisor, Assistant Professor Dr. Jessica Orlofske (Biological Sciences), are investigating new ways to use insects and other invertebrates as bioindicators to assess the health of wetlands and other aquatic ecosystems. 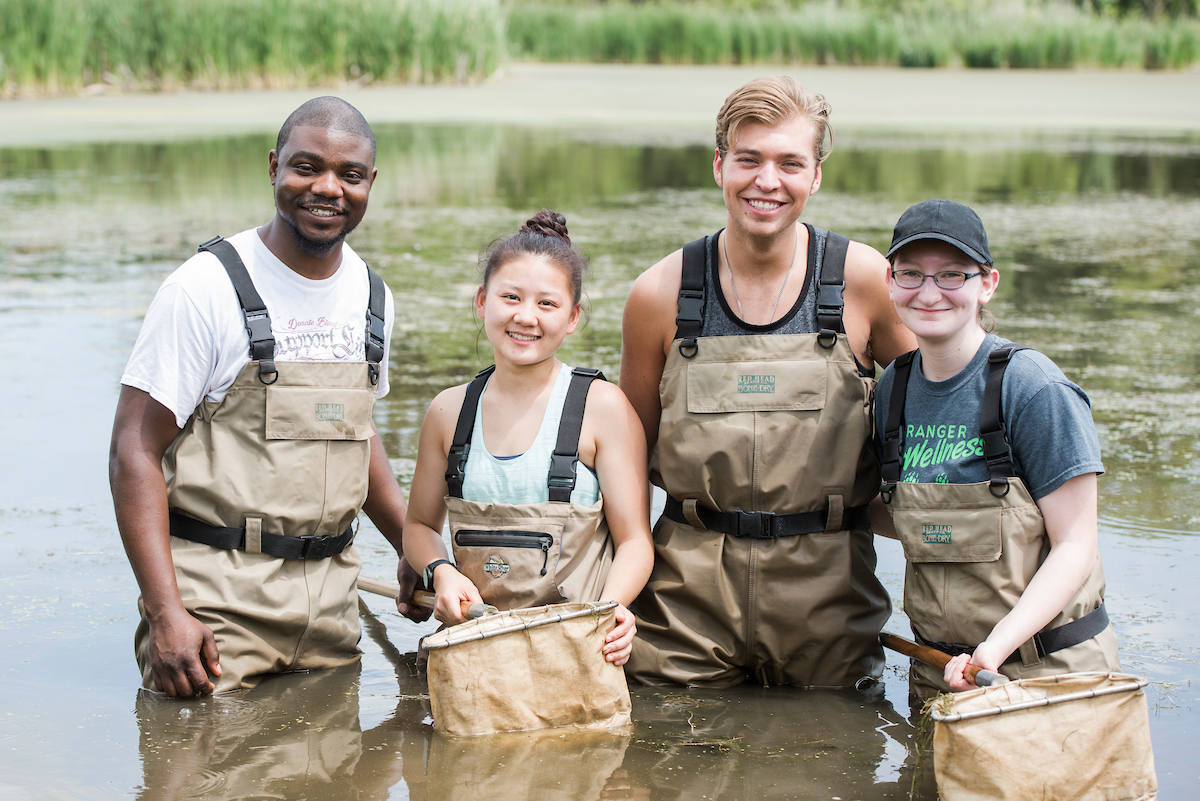 Leah Poulos (Kenosha), was awarded a 2019 College of Natural and Health Sciences Summer Research Fellowship to fund her work in the laboratory of Dr. Francis Mann. Leah’s project was focused on understanding the mechanism by which Mycobacterium tuberculosis produces the novel bactericidal compound (E,Z,E)-GGPP.

During her summer fellowship, Leah was able to purify three enzymes involved production of (E,Z,E)-GGPP. She then assayed the enzymes both individually and in pairs to determine which enzyme or enzyme combination resulted in production of the new compound. She also tagged the enzymes with specific labels that will allow future researchers to determine if the enzymes are forming complexes. Leah continued her research with Dr. Mann into the school year, and she is currently working with two other students to finalize data and submit her first publication. Leah plans to pursue a M.S. in toxicology or a related field prior to applying to medical school, and this summer fellowship provided her with experience in the laboratory while also helping build her research resume. 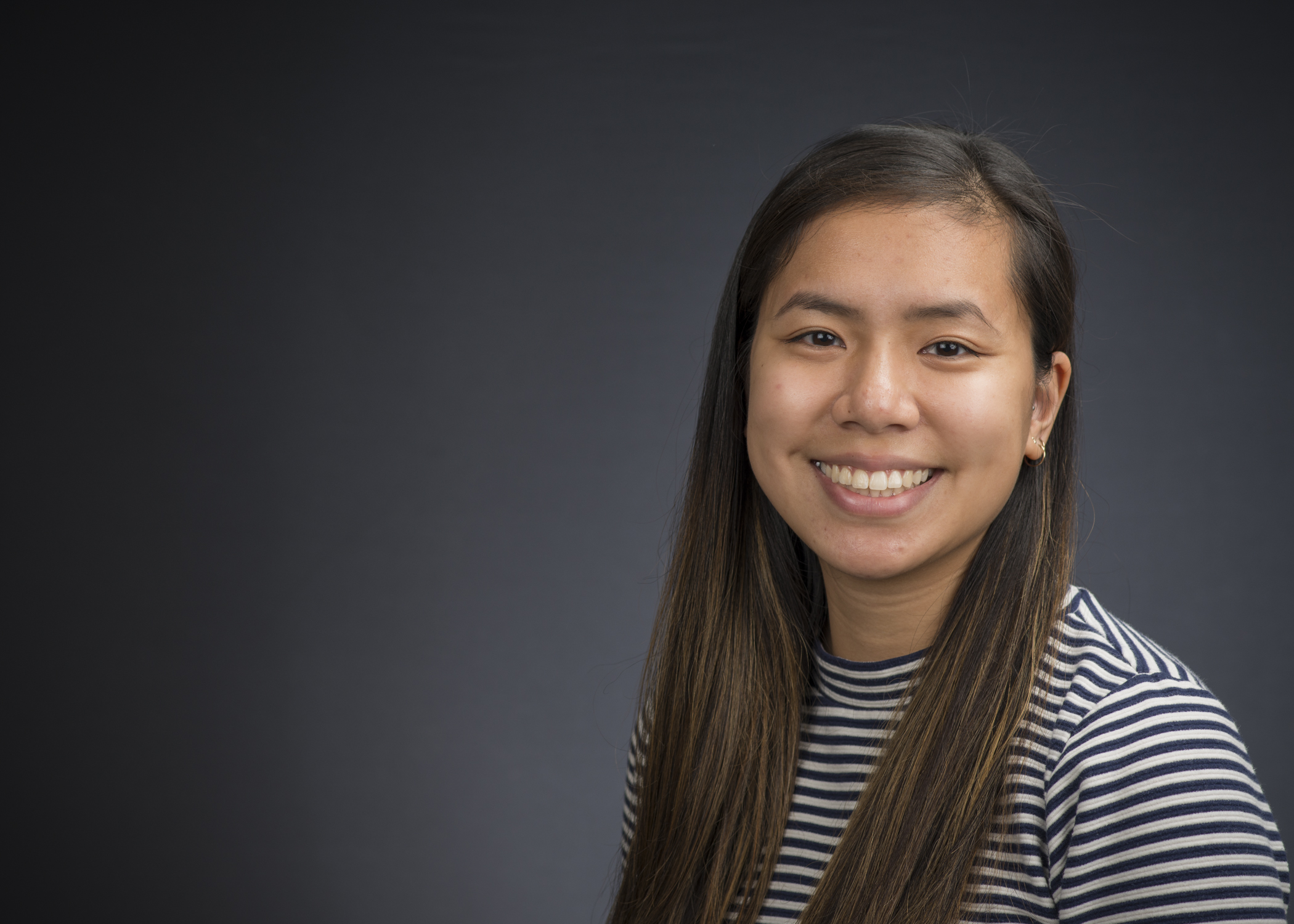 During his summer fellowship, Joel tested various silicon pseudopotentials for modeling the inert core electrons in each atom using density functional theory codes by calculating the relevant energetic properties of bulk crystalline silicon and comparing to published calculated and experiments values. He developed UNIX  shell and Python-based scripts to execute these codes and analyze the data produced by the codes’ simulations. Joel has continued his research with Dr. Parker into the school year beginning to model the electronic and vibrational properties of silicon, varying the exchange-correlation model used to solve the equations describing the electronic density in the material. Joel is currently working to produce data to present at the 2020 March Meeting of the American Physical Society. Joel plans to pursue a Ph.D. in physics, and this summer fellowship provided him with valuable experience in computational modeling while expanding his research portfolio. 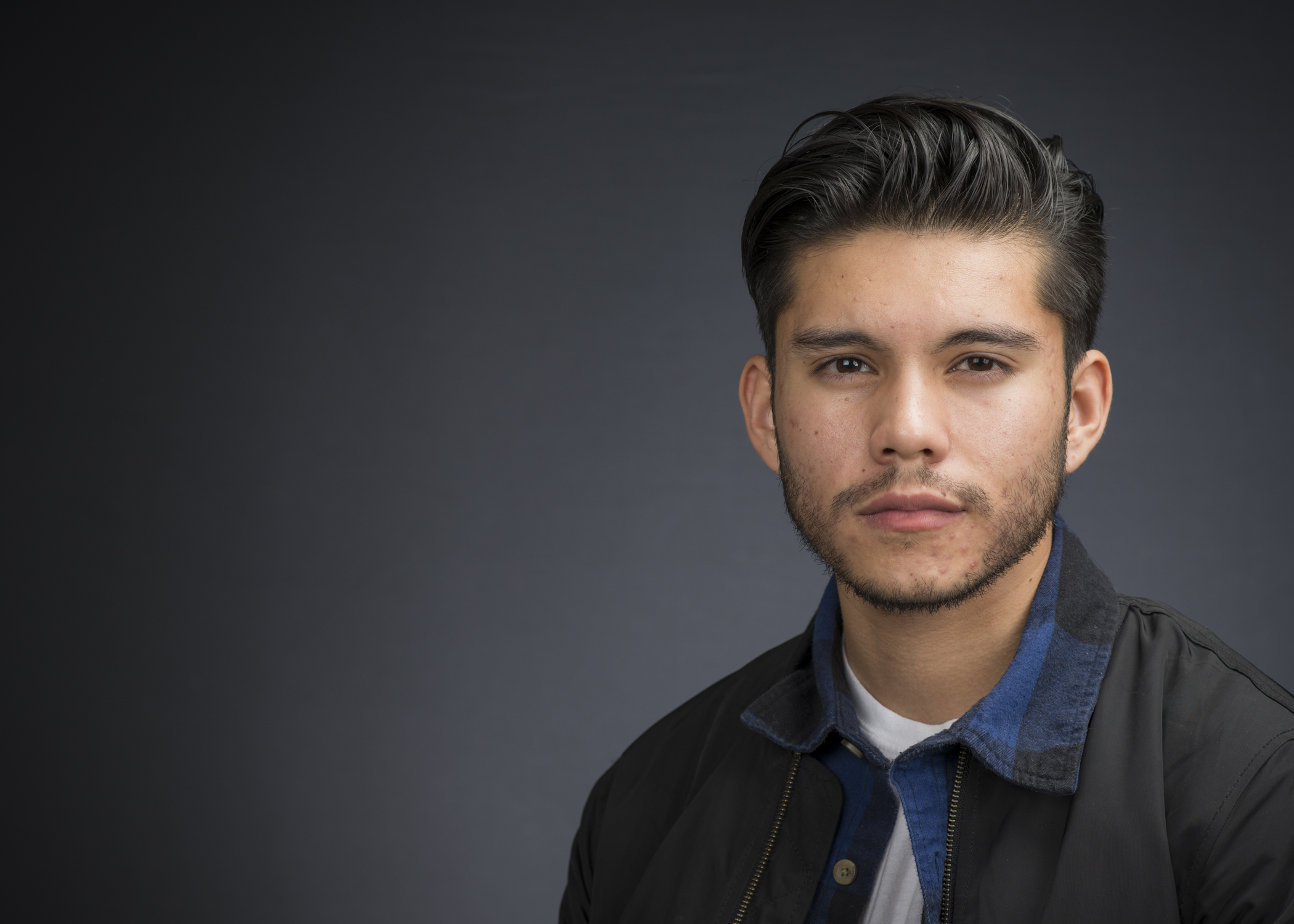 Mikayla Poehler and Dr. Sylvia Beyer have worked on this project for three semesters, designing the study, collecting data, and analyzing the results. Much of the summer was spent preparing a manuscript for publication. The tentative title of the manuscript is “Relations among College Students’ Modern Sexism, Conservatism, Religiosity, Global Belief in a Just World, Feelings towards Social Groups, and News Sources”.

The bulk of our work on the manuscript was spent writing the introduction and discussion sections. Reading the primary literature is not an easy feat for an undergraduate but Mikayla rose to the occasion and did an excellent job with her contributions to the manuscript. 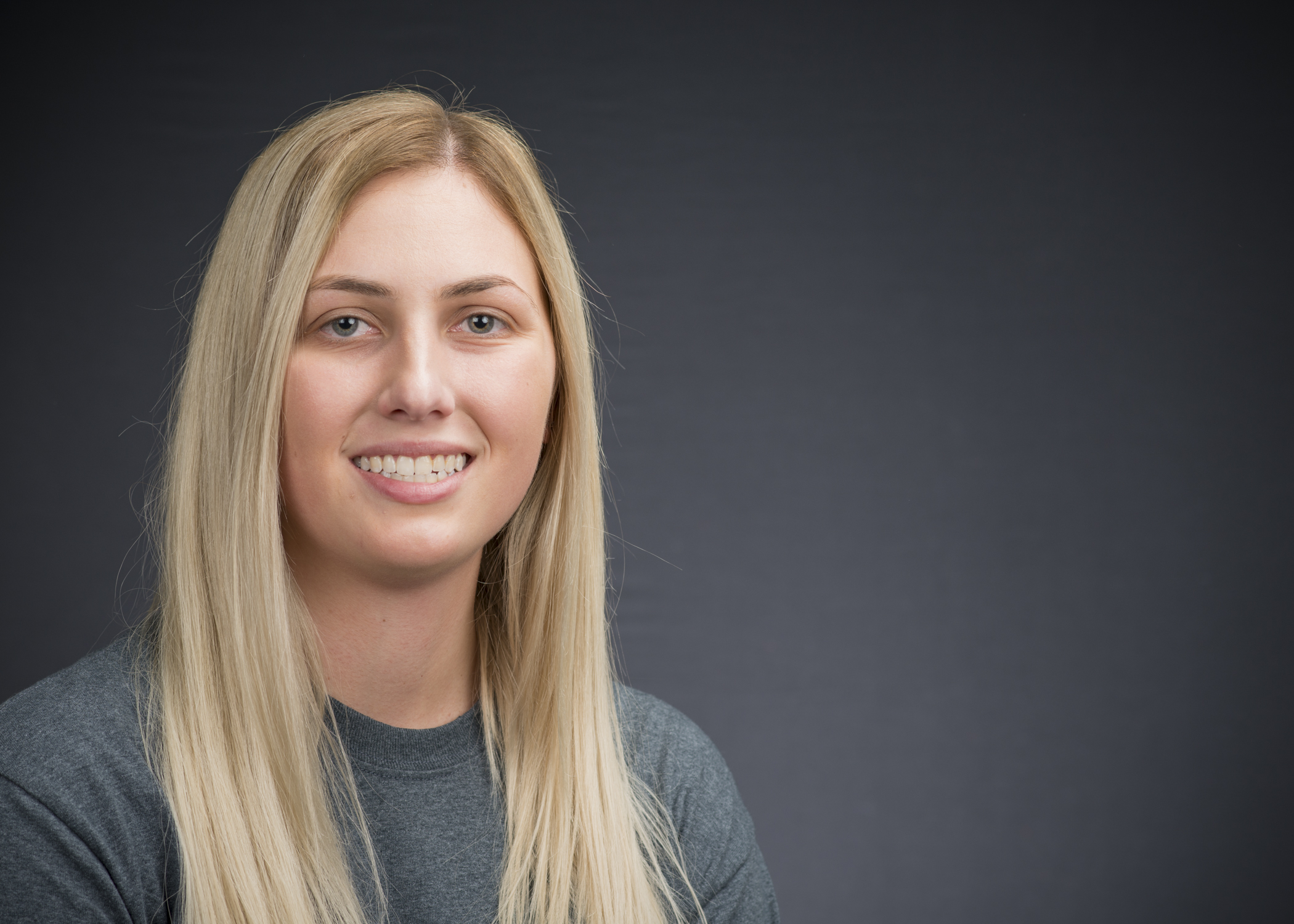 Nathan Arndt, was awarded a 2019 College of Natural and Health Sciences Summer Research Fellowship to fund his work with Assistant Professor of Physics Dr. Hom Kandel. Nathan worked on a research project titled “Bulk powder synthesis, thin film deposition, and x-ray diffraction and atomic force microscopy measurement of cuprate oxide superconductor and insulator” under the mentorship of Dr. Kandel who is recently working on a cutting edge research project on the development of a Josephson junction device.

The device is a key component of superconductor electronics with applications ranging from bio-magnetic sensors for mapping human brain activities to quantum computing and military and space applications. Initially, Nathan learned to perform synthesis of polycrystalline powder of cuprate oxide superconductor and insulator materials by solid-state reaction method in Dr. Kandel’s Applied Physics Research Laboratory at the UW-Parkside. Later, he traveled to the University of Wisconsin-Madison and stayed there for a month with Dr. Kandel to get training in thin film deposition and characterization studies of these materials. At the Materials Science and Engineering Department of UW Madison, he learned how to perform thin film deposition of oxide superconductors and insulators through a very complex pulsed laser-based thin film deposition process. He also learned to perform x-ray diffraction and atomic microscopy measurement of the thin film materials.

The hands-on training on these cutting edge technologies will provide him background to pursue his career in semiconductor industry or on his educational goal of pursuing a Ph.D. degree in the applied physics, materials science & engineering area.

Research Accomplishment
Based on the research, Nathan presented a scientific poster on the synthesis and fabrication of polycrystalline oxide superconductor and insulator at the Wisconsin Science and Technology Conference, UW-Stout, Menomonie, WI on the 22nd of July, 2019. Currently, he is working on his senior thesis on this topic. 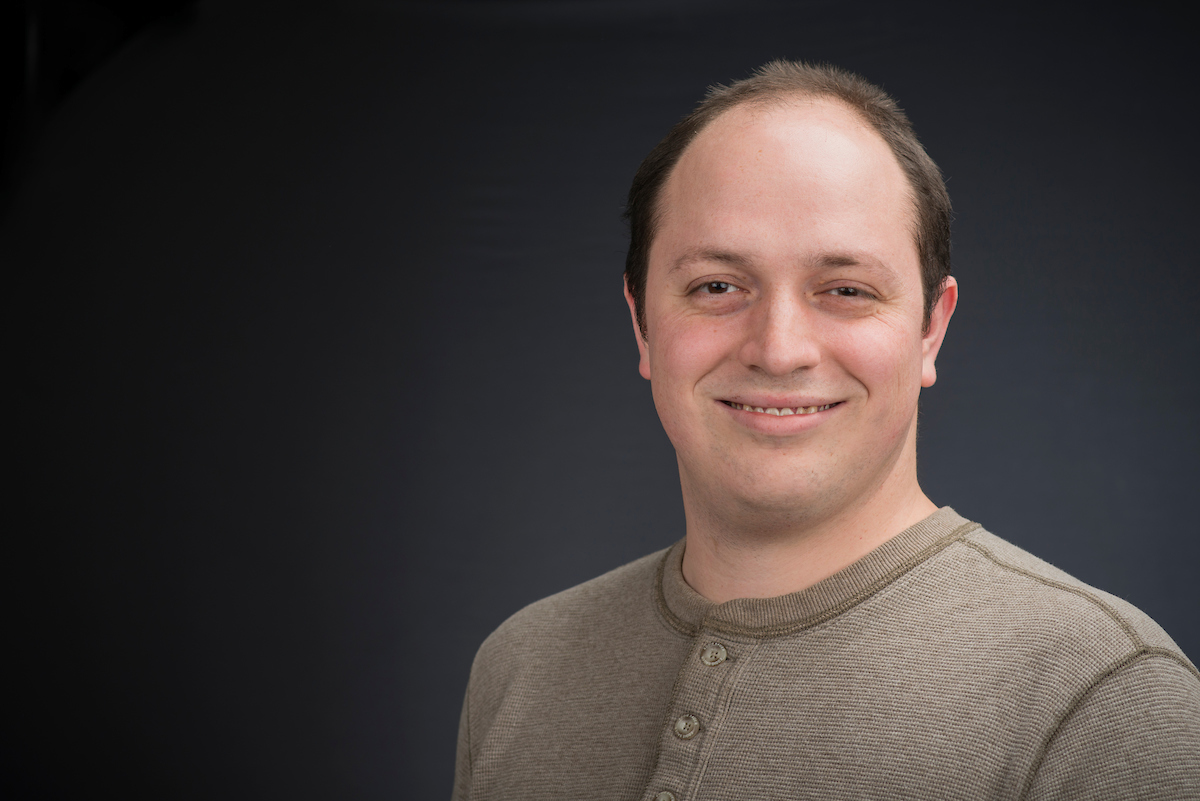 Dr. Hillard earned her BA in Psychology from Central Michigan University, her MS in Experimental Psychology at Western Illinois University, and her PhD from University of Notre Dame in Developmental Psychology. Her dissertation involved a community prevention program applying principles of psychology to the eating and grocery shopping habits of mothers of Elementary and Middle School children. Her research interests include adolescence, parenting, and body image and disordered eating prevention and intervention.

Most recently, Dr. Hillard finished a research project testing the application of a psychologically-based prevention and intervention strategy to reduce college women’s negative feelings about their bodies—a precursor to eating disorder development. She hopes to continue this and similar work at Parkside and within the greater Kenosha-Racine community.

Dr. Francis M. Mann (Chemistry) was awarded a 2019 College of Natural and Health Sciences Summer Faculty Fellowship to advance her research program. Dr. Mann is a biochemist focusing on natural products chemistry in microbes, and her summer research involved characterizing the synthesis of a novel bactericidal compound in Mycobacterium tuberculosis (Mtb).

Due to the pathogenic nature of Mtb, Dr. Mann’s research group uses the laboratory-safe bacterium Escherichia coli (E. coli) to house and express the biosynthetic pathways they wish to study. Dr. Mann’s students previously observed that combining two specific Mtb genes resulted in complete cell death of E. coli. These two genes encode enzymes involved in terpenoid metabolism. One gene is involved in building the cell wall, and the other gene is involved in synthesis of an immunosuppressive molecule. Dr. Mann’s group hypothesized that the combination of these two genes in the host E.coli resulted in a new chemical that has bactericidal properties for bacteria other than Mtb. Over the course of the summer, Dr. Mann worked with Leah Poulos, a student from Kenosha, to build tools that allowed the researchers to probe this hypothesis. Leah and Dr. Mann then used these tools and very recently obtained key data that supports their hypothesis, and they gained their first glimpse of the chemical character of the new product. The researchers are now working to generate enough of this product to completely characterize its structure, and they hope to publish their preliminary findings this year. Once the structure is complete, Dr. Mann’s research group hopes to investigate how this compound acts to kill E.coli, and determine whether its bactericidal properties extend to other bacterial families. 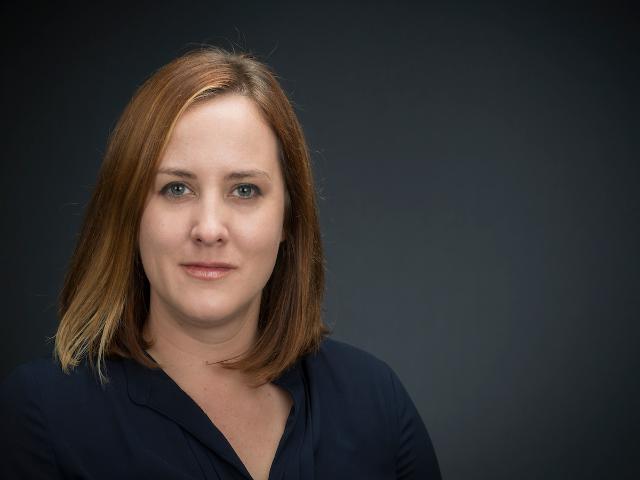 Have fun reconnecting with alumni, colleagues, and peers while supporting the CNHS Advisory Board Scholarship fund. Come and share your experiences with others, including our current students.