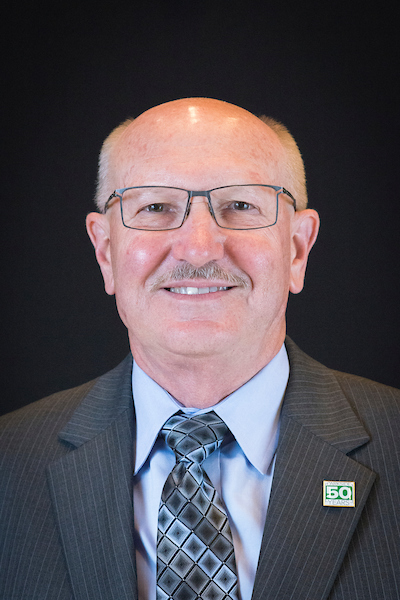 Tom Krimmel graduated from UW-Parkside in 1972 with a Bachelor of Science in psychology and later earned his Masters of Science in educational administration from UW-Milwaukee. He currently is serving as Associate Chancellor for University Development and Alumni Relations here at UW-Parkside.

A few years after graduating from UW-Parkside, Tom returned to campus in 1979 to lead the Development and Alumni Relations team. He helped establish the UW-Parkside Alumni Association and UW-Parkside Benevolent Foundation through his role as Director of Development and Alumni Relations. One of his greatest accomplishments on campus was leading the team that developed and implemented the financial plan to establish the university’s first campus housing, University Apartments.

After leaving UW-Parkside in 1986, Tom continued to have a successful career in University Development and Alumni Relations across the country. He had spent more than 25 years serving in senior leadership positions and higher-education fund raising and alumni relations. He joined former UWP Chancellor Alan Guskin as Senior VP for Development at Antioch University and then served as Vice President of Development and Alumni Relations at Babson College for 15 years, leading a team in securing over $122 million during a five-year comprehensive campaign.  The National Foundation for Teaching Entrepreneurship in New York was his next stop as Chief Development Officer where he helped develop the funding for their expansion of services to low income school districts in Los Angeles, Miami, Philadelphia and Dallas.

He went on to lead development efforts for the newly-established Franklin W. Olin College of Engineering, which resulted in record alumni and parent giving participation. In 2014, he joined GG+A (Grenzebach, Glier, and Associates) in Chicago as a consulting vice president, providing campaign and advancement-office recommendations for university and nonprofit clients around the world. Now, in 2019, he has returned to UW-Parkside.

While at UW-Parkside, Tom was active on campus as captain of the hockey team (club sport) and President of the Hockey Club. He also played spring soccer and club rugby. Tom’s wife, Elizabeth, and their daughter Kady Lichucki also graduated from UW-Parkside along with his brother-in-law Warren Lewis and sister-in-law Rosann Lewis. Tom received a UW-Parkside College of Natural and Health Sciences “Distinguished Alumni Service Award” in 2018.