The 90-minute spring 2016 convocation at the University of Wisconsin-Parkside was packed with highlights honoring student, faculty and staff accomplishments. The event also served as an official welcome to campus for Dr. Robert Ducoffe who will become the university's provost in April succeeding Dr. Fred Ebeid.

Service Anniversaries
The recognition of dedicated service is an important part of every spring convocation. This year, more than 50 people representing over 700 years of service to the university received service anniversary pins. Chemistry Professor Vera Kolb was honored for 30 years of service. 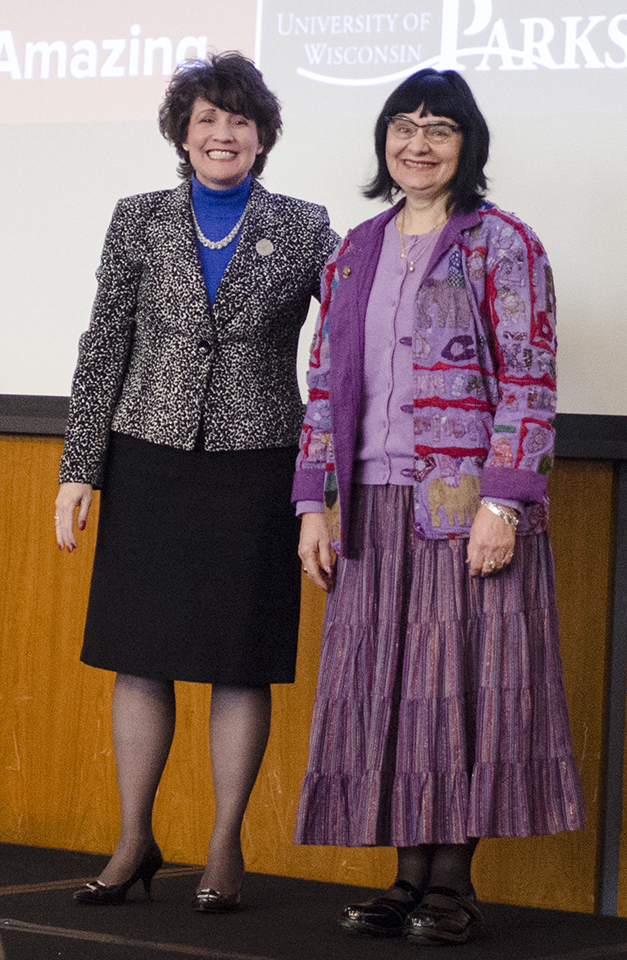 Vera Kolb (right) receives her service anniversary pin from Chancellor Debbie Ford. Kolb earned the UW-Parkside Award for Excellence in Research and Creative Activity in 1992 and was inducted in the Southeastern Wisconsin Educators' Hall of Fame in 2002. Her new book, "Green Organic Chemistry and its Interdisciplinary Applications," will be published in May.

Provost Welcome
In welcoming Dr. Ducoffe to campus as the new provost, Chancellor Debbie Ford said the university was fortunate to have a person with a commitment to academic excellence and student success. His arrival in April means that Dr. Ebeid's career comes to a close.

"The academic programs and community partnerships in which Fred has played a vital role are impressive to say the least," Ford said. "However, it is the experience of almost five decades in higher education serving as an assistant professor, associate professor, full professor, department chair, dean and provost that has been of such value to our university. That experience, that insight, and that perspective will be missed."

Updates from the Colleges
The deans from Parkside's four colleges provided updates on key initiatives and future plans.

Dr. Lesley Heins Walker, dean of the College of Arts and Humanities, highlighted initiatives including a partnership with Gateway Technical College involving Spanish classes, and the launch of associate degrees in liberal studies and leadership. In the future, the college plans to add a concentration in contemporary and commercial music, and a communication crafts partnership with Gateway.

In the College of Business, Economics, and Computing led by Dean Dirk Baldwin, community engagement through the Ralph Jaescke Solutions for Economic Growth Center and the App Factory have been in the spotlight. 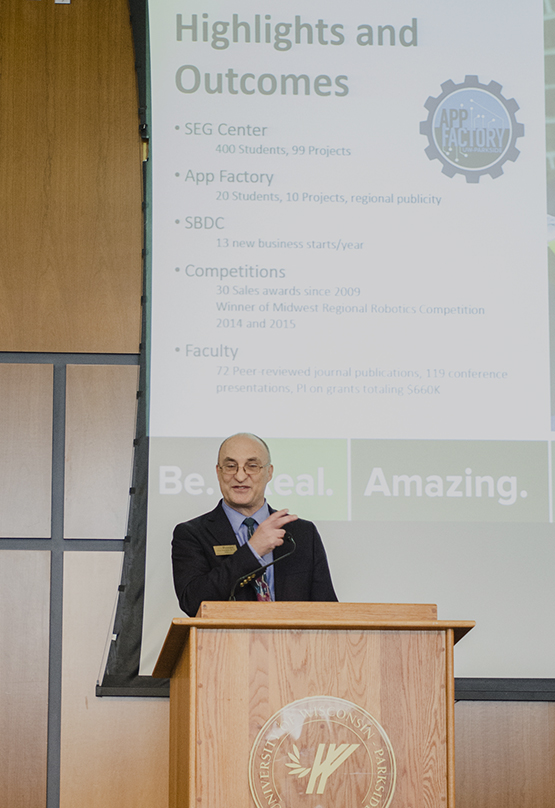 Dr. Dirk Baldwin, dean of the College of Business, Economics, and Computing

In just the past month, app-development efforts with Kenosha Area Transit and the Racine Belle Urban System have been featured on CBS 58 and TMJ4 television in Milwaukee and in the Journal Times and BizTimes news publications. Dr. Baldwin said future plans for the college include a business degree completion program offered online.

Dr. Emmanuel Otu, dean of the College of Natural and Health Sciences talked about the expansion of a current agreement with UW-Milwaukee that allows Parkside students who complete specific courses to pursue one of two engineering degrees in the UWM College of Engineering & Applied Science. The expansion could open opportunities for Parkside students to pursue additional UWM programs. Dr. Otu also discussed plans to add physician assistant and public health master of science degree programs. At the recent December 2015 commencement, the college awarded its first master of science in sustainable management – a degree program the university offers online in collaboration with four other UW System campuses through UW-Extension.

In the College of Social Sciences and Professional Studies, Dean Peggy James said academic disciplines in the college are at the heart of one of the most important missions of the university – community engagement. Initiatives include stronger partnerships with K-12 education, and encouraging those not currently enrolled, but who may be close to graduation, to return and finish their degree.

Student Accomplishments
From athletics, to theatre, to politics, the accomplishments of Parkside students were on display during the ceremony. Ranger student athletes combined for a 3.08 grade point average last semester, led by the women's volleyball team at 3.42. And both the men's and women's cross country teams qualified for the NCAA Division II national championships, a rare feat in college athletics.

Communication major Britney Woods was invited by U.S. Sen. Tammy Baldwin to attend President Barack Obama's final State of the Union address. Upon her return, Woods was interviewed by regional publications and TV stations, by statewide Wisconsin Public Television news program Here and Now, and the national USA Today College website. In addition to her perspective on attending the address, the interviews focused on Woods' insight on college access and affordability.

Making a Difference
Chancellor Ford closed the program by thanking faculty and staff for their dedication to student success. 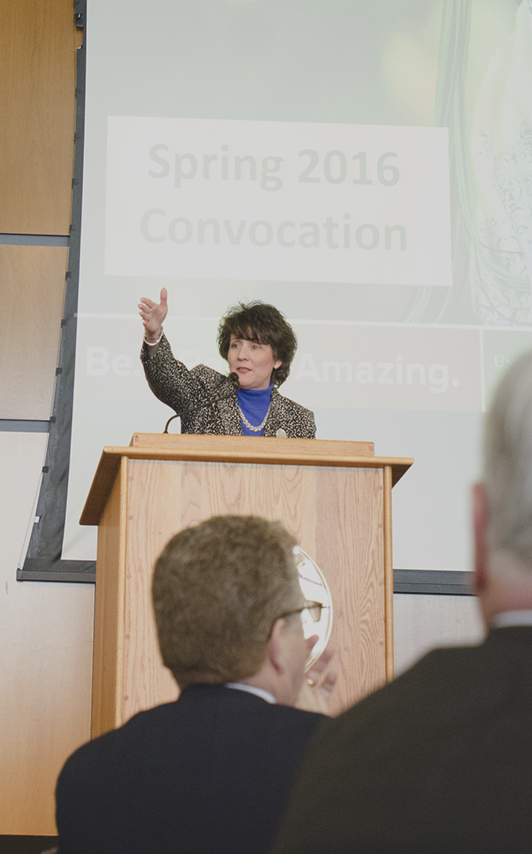