The computer science major at UW-Parkside is designed to give you the skills and knowledge needed to be successful in a variety of careers related to information technology. Whether you're a novice or programming enthusiast, you'll be taught directly from instructors who are professionals, scholars, and real people.

Our faculty place emphasis on building skills future employers expect, such as teamwork, communication, and interpersonal skills. And it works. Our computer science majors are sought after by regional, national, and international employers. In fact, 99% of our graduates find placement in the industry or grad school.

Courses in the Computer Science program provide you with a background in software, hardware, and mathematical foundations. You will discover relevant computer science theory and will be able to apply it to real-world situations. Parkside instructs students using leading edge curriculum that follows internationally recognized ACM/IEEE (Association for Computing Machinery) guidelines. 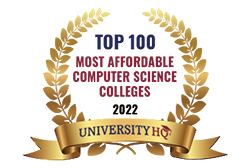 Students from Parkside attend and compete in programming and robotics competitions.

Parkside's unique location within the Chicago/Milwaukee corridor provides you with ample internship opportunities with major employers and small businesses in the region.

The Computer Science Club is an organization focuses on the use, study, and application of computers and technology. This club provides a service to Parkside students and staff including:

The App Factory is an interdisciplinary group at of undergraduate and graduate Parkside students that develops mobile apps for clients in the local communities.

Parkside Computer Science students have the opportunity to study at our sister institutions in Germany, Mexico, and India.

Business Analyst | Works as a liaison to analyze and communicate business processes into technical requirements which a programmer or developer can then use to create systems which meet all requirements of the customer.

Full Stack Developer  |  Full Stack Developers are computer programmers who are proficient in both front and back end coding. Their primary responsibilities include designing user interactions on websites, developing servers and databases for website functionality and coding for mobile platforms.

Mobile Developer  |  Mobile developers are a type of software developer. They specialise in mobile technology such as building apps for Google's Android, Apple's iOS and Microsoft's Windows Phone platforms. For this reason job titles for this type of role also include Android developer and iOS developer.

Project Manager | Defined as a facilitator. Plans, tracks, and manages computer-orientated projects, communicates with customers, developers, service providers and/or vendors. Directly responsible for making decisions in such a way risk is controlled and uncertainty minimized.

Software Engineer | Applies the principles of software engineering to the design, development, testing, and evaluation of the software and systems which make computers, appliance, machinery, or anything which uses software to work effectively.

System or Network Administrator | Configures, manages and maintains computers and their networks.

Many graduates are employed by major regional and national companies, including:

More than $250,000 in UW-Parkside Foundation Scholarships are awarded yearly.

I chose Parkside's Computer Science Program because my father graduated from Parkside and recommended their CS Program. Of course I have always loved breaking computers, I want to learn how to fix them!

I chose UWP's CS program because: UWP's business school has a good reputation, is close to home, and is one of the schools the company I want to work for recruits from.

I chose Parkside's Computer Science Program because of the affordability and pleasant atmosphere, was met cordially by an outstanding faculty, and have thoroughly enjoyed my learning experience through a challenging curriculum.

I chose UWP's CS program because: I love Kenosha and wanted to stay in the area. I could no longer afford Carthage and felt like I would be getting a better education at Parkside. I also like that the class sizes are small enough that your professors get to know you and help you one on one.

I chose UWP primarily due to its location and program. My family has attended UWP which also played a role in my decision to attend UWP. I liked the small class sizes and lack of T.A.'s that other schools tend to have. When I was looking for schools, UWP offered JAVA which was what my focus at the time was.

See what our students have to say.

Zaid Altahat, Dr.
Assistant Professor
Zaid joined UW–Parkside as an Assistant Professor in the Computer Science department and the director of the App Factory in 2016. He earned his Ph.D. in Computer Science/Software Engineering from the Illinois Institute of Technology in Chicago in 2010. Prior to joining Parkside, Zaid worked in the industry for close to 20 years for companies such as GE Healthcare, Motorola, Baxter, UniquSoft, and ComEd. Zaid’s experience has been in Software Engineering, Mobile and web apps, Cloud Computing, Healthcare, and Telecom.
Read Full Profile
Tim Knautz, M.S.
Lecturer - Computer Science
Prof. Timothy Knautz has over fifteen years of experience as a Software Engineer for high tech companies such as GE Healthcare, Marquette Medical Systems, Merge Technologies and Fluid Dynamics, Intl. Mr. Knautz also has over fifteen years’ experience teaching at the University of Wisconsin-Parkside. Tim joined UW–Parkside as a Lecturer in the Computer Science department in 2001. He teaches the introductory computer, object oriented programming, client and server web programming and web security. Previous to that, Tim worked in industry as a software engineer. In addition to his teaching responsibilities, Tim is the Founder and Associate Director of the App Factory and the Director of the Solutions for Economic Growth (SEG) Center. Tim’s technical and programming expertise concentrates mainly on Web and mobile software engineering and programming.
Read Full Profile
Susan Lincke, PHD CISA CRISC
Associate Professor - Computer Science
Dr Susan Lincke received her Bachelor's Degree in Systems Analysis from Miami University in Ohio, and her MS and PhD in Computer Science from Illinois Institute of Technology. She has 17 years of industry experience in data and telecommunications, with Motorola, MCI, and GE, working in development, test, and project management. After earning her MS degree, Dr Lincke switched to a career in academia. She is certified by ISACA for auditing (CISA) and risk (CRISC).
Read Full Profile
Viji Ramasamy, Ph.D.
Associate Professor
Vijayalakshmi Ramasamy is an Associate Professor of Computer Science at the University of Wisconsin Parkside, Kenosha, Wisconsin, USA. She brings to bear an extensive academic and research experience of over 25 years. Before joining UW-Parkside, she was a Visiting Assistant Professor at Miami University, Oxford, Ohio, and an Associate Professor at PSG College of Technology, Anna University, India. She also held an adjunct position at the University of South Australia (UniSA), received a research grant from Cognitive NeuroEngineering Lab at UniSA, established a Computational Neuroscience Laboratory at Anna University, India, and worked on an NSF research grant in collaboration with Florida International University. She has taught multiple courses in Data Science, Computer Science, and Software Engineering and has supervised several MS and Ph.D. research scholars. Her research interests include graph data analytics as a multidisciplinary domain comprising work from various fields such as Data Mining, Machine Learning, Pattern Recognition, and Graph Theory applied to different disciplines, including computational neuroscience, computer, biological, social networks, and, most recently, undergraduate STEM Education (educational data mining and learning analytics). She has published over 54 peer-reviewed articles, at top-tier venues in Computer Science, including IEEE, ACM SIGCSE, Neurocomputing, and Journal of Neural Engineering. She has received many teaching grants, including the eLearning Teaching Research Grant for Innovative Learning Space and Center for Teaching Excellence Major Teaching Research Project at Miami University, Ohio, USA.
Read Full Profile
Kamil Samara
Assistant Professor
Read Full Profile
Previous Next