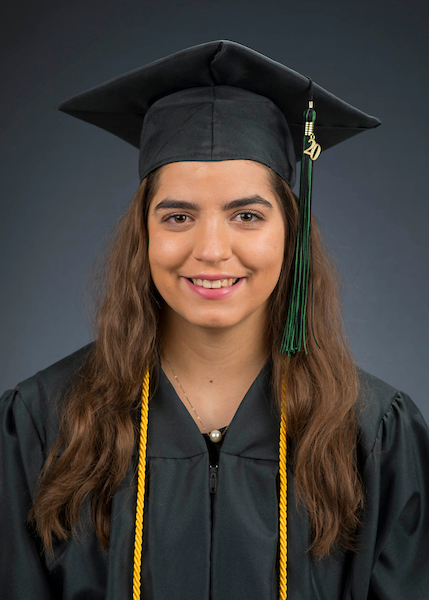 Mariana Nelson’s perseverance in the face of adversity, significant contribution to her community, outstanding academic performance, and her commitment to the success of her peers make her an ideal candidate for UW-Parkside Chancellor’s Award. No stranger to adversity, Nelson grew up in a Bulgarian orphanage where early foundational educational experiences were rare. Nelson has been involved with UW-Parkside’s App Factory and Small Business Development Center for three years and has served as the App Factory’s “lead” designer. Nelson’s skills earned her first place in “The Big Idea Innovation Challenge” for creating a review-type app where companies’ level of accessibility for those who need Americans with Disabilities Act or related accommodations could be charted and tracked. The app will function under Nelson’s privately-owned LLC, Capp.

Nelson has also been supportive of her UW-Parkside peers. She has served as a resident advisor in Ranger Hall where she surpassed her regular duties by tutoring students, proofreading their papers, and creating community building activities. Nelson is an engaged member of her church community, and has worked with Lakeland Care, performing outreach and hands-on activities for children suffering and recovering from brain injuries. She has also volunteered at the St. Vincent de Paul retail and donation centers and as part of her church’s facilities staff. Nelson worked as a dietary aide at East Troy Manor nursing home for two years and also played the baritone saxophone in UW-Parkside’s Wind Ensemble and Community Band. 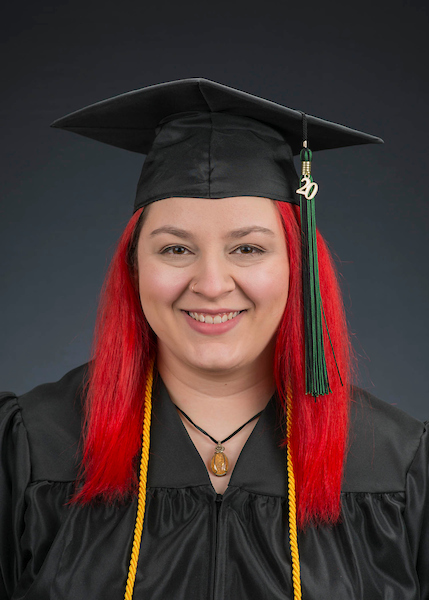 Jessica Cole earned degrees in both Art and English, as well as a Creative Writing Certificate. She has been an exemplary student whose leadership in the classroom stems from her own personal drive for success. Cole’s presence makes the class better for the other students. In addition to her leadership in the classroom, Cole also performed at a high level academically, submitting consistent and quality work for every assignment. Cole repeatedly made the Dean’s and Provost’s list over the last three years; won the 2020 Teresa Peck Award conferred to the student with the best paper, presentation, or artifact that speaks to issues of gender; won the UW-Parkside 2019 Academic Achievement Award; earned a 2018 Midwest Student Exchange Program Scholarship; and won the Rita Tallent Picken Scholarship in 2018.

Cole has also been a valuable member of UW-Parkside’s Literature and Languages Department community, taking part in the department’s annual writer’s conference and presenting, working on the design and layout team for the literary magazine Straylight in which she was featured in the spring 2019 edition, served as a writing tutor and had her artwork featured on the television show Modern Family. 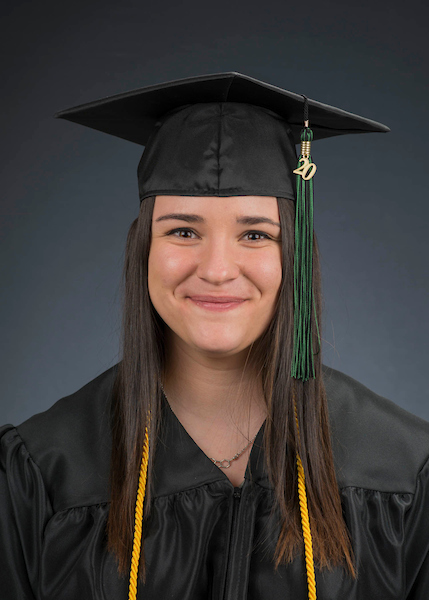 Lara Ferrari is a Chemistry major with a concentration in Biochemistry. She has achieved a 3.76 GPA in a challenging major while also balancing her role as goalie on the UWParkside’s women’s soccer team, pursuing her self-improvement goals, securing an internship, and finishing a research thesis. Ferrari transferred to UW-Parkside from an Italian university, and has worked hard to become fluent in the English language while also facing the challenge of becoming fluent in the language of organic and
biological chemistry.

She worked very hard and found an internship at a biotechnology company in Madison. The staff at The Coating Place, which designs and tests coatings for pharmaceutical delivery speak highly of Ferrari. She has both tenacity and unfettered enthusiasm. Ferrari has worked on a project in the laboratory of Dr. Francis Mann that is focused on understanding the biosynthetic pathway for production of a glycocarrier lipid with antibiotic properties for four semesters. She has won a highly coveted Undergraduate Research Apprenticeship Program (URAP) award, presented her researchto Wisconsin legislators at the Research on the Rotunda event, and she will begin her graduate training at UW-Madison in the Department of Pharmaceutical Sciences in January, 2021. 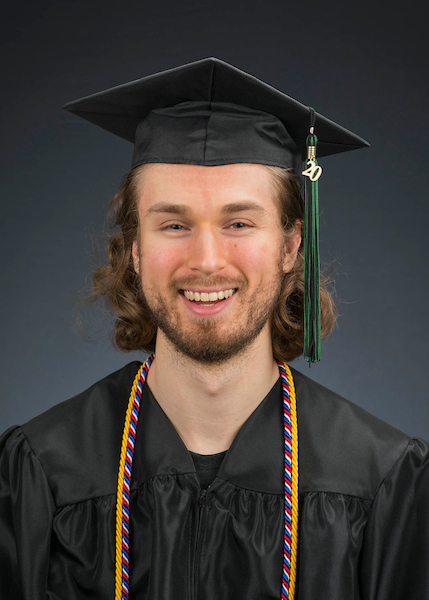 Michael Fischer boasts a 3.96 GPA and has performed undergraduate research with multiple faculty members in the Computer Science and Geoscience department in addition to working in the UW-Parkside App Factory and Globus; a database for the data management of research projects. During his sophomore year, Fischer copublished a paper about crowd sourcing and data mining with Dr. Derek Riley. Through his hard work and dedication, Fischer earned letters of recommendation from Drs. Lincke and Riley for him to be part of the Big Data REU (NFS Research Experience for Undergraduates). Fischer impressed his REU mentor, Prof. Kyle Chard, and together they co-published a paper, which is now in the respected IEEE database.

Fischer volunteered as a data scientist for Globus at the Computation Institute for three years. In addition to data work, Fischer has worked on other Globus software projects. In April 2019, he was hired as a programmer at the UW-Parkside App Factory and worked on several data analytics projects for local businesses. His most recent project analyzes cyanotoxins within algae blooms in the Great Lakes. Fischer plans to start up his own data analysis company and plans to continue to monitor these toxins after graduation. 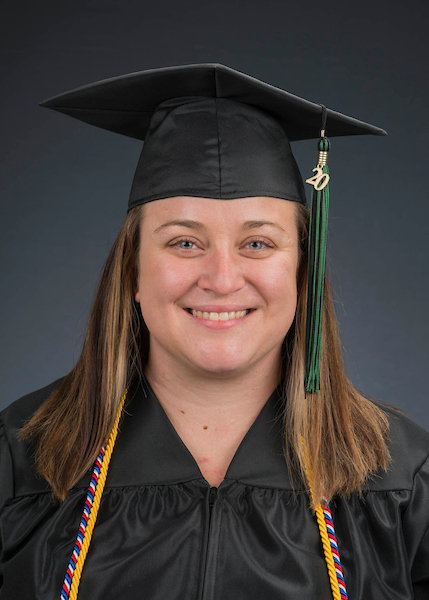 Kelsey Gumm is graduating with a Communication Major and a Public Relations Minor. Before enrolling as a student at UW-Parkside, Gumm served in the United States Navy for ten years. During her enlistment in the Navy, Gumm served as a Sexual Assault Awareness and Prevention Representative for five years. In 2013, she traveled to Rwanda, Africa where she helped to care for widows and orphans of the Rwandan Genocide. After being diagnosed with a rare heart condition, she enrolled at UW-Parkside and found a home in the Communication Department where she has cultivated her voice and honed her public relationsskills to assist other veterans in their transition from military to civilian life.

Before Gumm enrolled at UW-Parkside, she dedicated herself to help other veterans transition from military to civilian life. She has worked for both the Wounded Warrior Project and The American Heart Association. Gumm has earned Dean’s and Provost’s lists multiple times and was inducted into the National Communication Association’s Honor Society, Lambda Pi Eta. She currently leads support groups for female veterans who were victims of military sexual trauma and was nominated for the Woman Veteran of Wisconsin Award through the Wisconsin Department of Veterans Affairs. 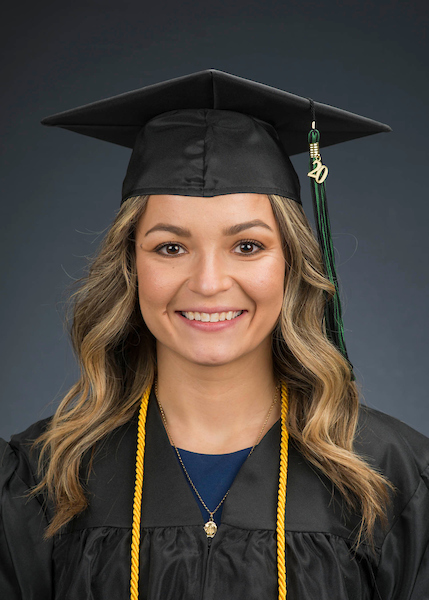 Kalie Sadowski is an incredibly hard-working, focused, and resilient individual. She has earned a 3.973 GPA throughout her academic career and is well regarded among UW-Parkside faculty in the Politics, Philosophy, and Law Department. Sadowski participated in the Undergraduate Research Apprenticeship Program (URAP) and served as the supervisor of a research team consisting of five undergraduate students. In this role, Sadowski collected data, assisted students in data collection, and managed a project schedule for her team. Her participation in the research lab led to the acceptance of a co-authored peer-reviewed journal article at the Canadian Journal of Political Science.

Sadowski worked as a research assistant on a grant from the Tommy G. Thompson Center on Public Leadership. She has consistently enrolled in 12-15 credits per semester, worked an average of 25-30 hours a week outside of the university, and has dealt with significant health challenges. Sadowski regularly experiences seizures and has undergone two brain surgeries to remove tumors. Even in dealing with these health issues, Sadowski continues to excel and perform well. She is an active participant in student organizations like UW-Parkside’s Student Government, departmental organizations, academic events, and internships related to her future career. 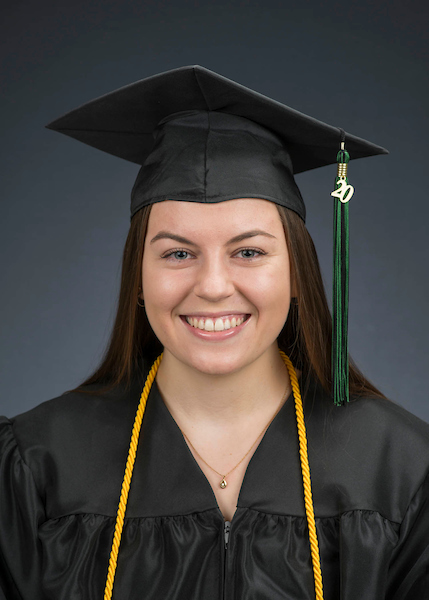 Marie Wedepohl is clearly an exceptional student academically and has a nearly perfect GPA. She has been on the Dean’s and Provost’s lists every semester of her undergraduate career at UW-Parkside and is motivated by her genuine love of learning. She excels with a challenging course load, and is graduating with a major in Biological Sciences and a minor in Chemistry. She has been able to achieve this while also being deeply committed to serving her peers and the UW-Parkside community as a tutor, supplemental instruction leader, and Vice-President of the Pre-Health Club, as well as many other service-based clubs. As a sophomore at UW-Parkside, Wedepohl was selected to participate in the Rural and Urban Scholars in Community Health (RUSCH) program at the University of Wisconsin School of Medicine and Public Health.

Wedepohl often went above and beyond in her classes and assisted her peers in better understanding the material. She qualified to be a human anatomy tutor, a highly sought after paid position for which only the top one or two students qualify each semester. She is an extremely resilient individual who is highly goal-oriented and rises to meet the challenges in front of her with maturity and composure.