Mathematics is of central importance in the sciences. In fact, mathematics has been called the language of science. This applies not only to the physical and biological sciences but increasingly to the social, managerial, and behavioral sciences as well.

Much of mathematics, and the mathematics major at Parkside, has been developed to meet the needs of the areas of human knowledge that it serves. In addition to its service role in other areas, mathematics occupies a place of its own in our intellectual heritage. From ancient Greece to our own times, people have been drawn to the elegant structure and the fascinating problems of mathematics.

Courses are taught by dedicated professors, some of whom have won awards in teaching or research. The Mathematics Department faculty is committed to helping every student interested in the compelling field of math to succeed. 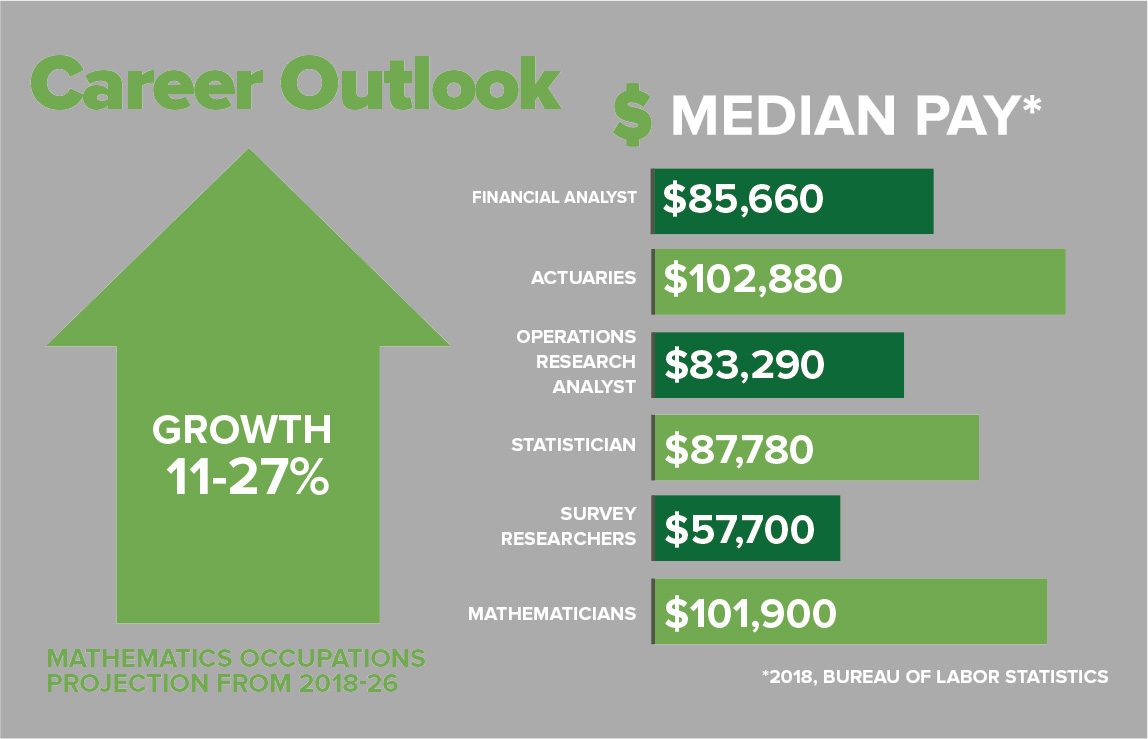 Andrea Citati
Lecturer and Department Chair
Read Full Profile
Heidi Ertl, BS, MS
Lecturer
Ms. Ertl earned her B.S. in Mathematics and Secondary Education Teacher Certification from the University of Wisconsin-Parkside in 2011. She continued on to earn her M.S. in Mathematics from the University of Wisconsin-Milwaukee in 2014 where she won the Ernst Schwandt Award, an award given to a graduate teaching assistant who demonstrated excellence in mathematics teaching. Her interests are in mathematics education, and her master's thesis focused on The Common Core State Standards for Mathematics and the Singapore Mathematics Curriculum Framework.
Read Full Profile
Hom Kandel, PhD
Assistant Professor
Dr. Kandel is an Assistant Professor of Applied Physics and Director of the Applied Physics Laboratory at the University of Wisconsin-Parkside. His research focuses on designing and performing experiments to grow and study superconductor (S) and insulator (I) thin films, coatings, and heterostructures for applications in superconductor electronic devices and superconducting magnets with extremely high magnetic fields. Currently, his research group is developing a high-temperature superconductor YBCO-based S-I-S tunneling sandwich-type Josephson junction device for applications in SQUID bio-magnetometer sensors, quantum computers, and terahertz frequency detectors in collaboration and partnership with the Univesity of Wisconsin-Madison, National High Magnetic Field Laboratory, University of Michigan, and other national laboratories and universities.

Before coming to the UW-Parkside in 2016, Dr. Kandel worked as a Postdoctoral Research Scientist at the National High Magnetic Field Laboratory (National MagLab) in Florida State University, the largest and the highest-powered magnet laboratory in the world. At the National MagLab, he was the lead scientist to develop novel electrical insulators for YBCO and Bi-2212 based high field superconductor magnet technology. Dr. Kandel holds two US patents on electrical insulation technologies, have published almost 30 journal papers, and have presented his research in over 60 conferences, workshops, and symposiums.

Currently, Dr. Kandel serves as the Chair of the Academic Achievement Assessment Committee (AAAC), Academic Editor of the Advances in Materials Science and Engineering, and Advisor to the Parkside Journal of Science. He has peer-reviewed premium physics and materials science/engineering journal articles and Grant Proposals for the Department of Energy (DOE) and the National Science Foundation (NSF).
Read Full Profile
Ryan Karr
Associate Professor - Mathematics And Physics
Read Full Profile
Richard Karwatka
Senior Lecturer - Mathematics
Richard Karwatka is a product of the University of Wisconsin System, having pursued undergraduate study in mathematics, French, and history at UW-Parkside and graduate study in mathematics and mathematics education at UW-Madison. His professional teaching career began as a teaching assistant at UW-Madison where his efforts in calculus instruction earned him one of the inaugural French-Felten Awards for Inspirational Teaching bestowed by the College of Letters and Science. He returned to UW-Parkside as a member of the instructional academic staff teaching courses in the pre-calculus mathematics curriculum and has since been deeply involved in continuing efforts to improve content delivery and student outcomes in mathematics courses, eventually serving as Coordinator of Developmental and Proficiency-Based Mathematics at UW-Parkside and as Chair of the UW Mathematics Placement Test Development Committee at UW System. As a UW-Parkside alumnus, he always hoped that he would be able to return to his alma mater to contribute to it in gratitude for the path on which it set him, and he has been honored to receive the Stella C. Gray Teaching Excellence Award and the Academic Staff Distinguished Service Award in recognition of those contributions.

When not engaging matters mathematical, Karwatka enjoys music, art, and history, especially that of the monarchies from which his ancestors emerged. He is a particular fan of the Habsburg Empire in all its incarnations and would gladly go on and on about it for hours if given the opportunity.

Bom Soo Kim received his Ph.D. in physics from the University of California at Berkeley and his B.S. in astronomy from Yonsei University. He trained as a postdoctoral researcher in a joint appointment with IESL-FORTH and the University of Crete and then at Tel Aviv University. He previously worked as a teaching postdoc at the University of Kentucky and as a full time Lecturer at Loyola University Maryland. He is excited to share his experiences working at academic institutions with different cultures and to further collaborate in his research and teaching with students and faculty members at UW-Parkside.
Read Full Profile
Victor Kreiman
Associate Professor - Mathematics
Read Full Profile
Qinghua Luo
Assistant Professor
Qinghua Luo is an Assistant Professor of Mathematics at UW-Parkside. Her research interests are in the areas of partial differential equations, optimization, and identification problems. Her doctoral dissertation was on studying the existence and uniqueness of solution of a damped Klein-Gordan equation with diffusion coefficients in certain functional spaces. Besides her love for mathematics, she loves teaching. She is eager to find ways that make mathematical ideas easier to understand and more meaningful to her students.

Qinghua Luo received her Ph.D. in Mathematics and M.Ed in Mathematics Education at the University of Oklahoma, and her B.S. in Mathematics from Zhejiang University in China. Before she joined Parkside in 2019, she taught at the Marian University, which is a liberal arts college located in Fond du Lac, Wisconsin. She is excited to share her knowledge and experiences in mathematics and math education with her students and colleagues.
Read Full Profile
Rebeccah MacKinnon
Lecturer
Rebeccah MacKinnon has been a lecturer in the Mathematics and Physics Department at UW-Parkside since 2019. She has made a niche for herself by teaching introductory college math classes with her trademark enthusiasm and passion for student success. She serves as liaison to the PARC (Parkside Academic Resource Center) for the math department and as Parkside’s representative on the UW System Math Placement Test Committee.<br> <br>Before coming to Parkside, Dr MacKinnon completed her doctoral studies at the University of Iowa with her dissertation<i>, An Equivalence Between Combinatorial Tangle Floer and Contact Categories</i>. While at Iowa, she completed a Certificate in College Teaching and received an Outstanding Teaching Assistant Award, leading her to focus her career on college teaching rather than pure mathematics research.
Read Full Profile
Paul Mohazzabi, Ph.D
Professor - Physics
Paul (Pirooz) Mohazzabi received his Bachelor’s Degree in Chemistry in 1969 from overseas, and MS and PhD degrees in Materials Science and Engineering from the University of California, Berkeley, in 1972 and 1975, respectively. After receiving his PhD degree, Paul realized that his true passion was in theoretical physics and mathematics, and remained as a physicist ever since.<br>After working at other institutions for 10 years, Paul joined the University of Wisconsin-Parkside in January of 1986 as an Assistant Professor of Physics. In 1988, he received tenure and in 1994 he was promoted to the rank of Full Professor.<br>Paul’s area of expertise is theoretical and computational physics. Nevertheless, he has published nearly 100 research articles in refereed international journals in a wide variety of disciplines including physics, chemistry, mathematics, geology, materials science, engineering, and medicine. His articles range from bicycle stability to cancer theory. Paul’s current research interests are (a) theoretical and computational thermodynamics and statistical mechanics of small and nanosystems, particularly through Monte Carlo and molecular dynamics simulations, (b) Theoretical and computational studies of thermal and mechanical properties of solids and liquids, (c) Pedagogical aspects of physics and mathematics.<br>At the University of Wisconsin-Parkside, Paul has received three Stella Gray Teaching Excellence Awards, Two awards for Excellence in Research and Creative Activity, and a Faculty Distinguished Service Award.<br>Some of Paul’s former students have gone on to become educators themselves, as high-school teachers or professors at major universities.
Read Full Profile
Lan Nguyen
Associate Professor - Mathematics
Read Full Profile
William Parker, PhD
Assistant Professor
I took my very first physics class at the University of North Texas and later transferred to the University of Texas at Austin where I studied for my B.S. in Physics and B.A. in Astronomy, finishing in 2002, and completed my PhD in physics in 2010 at the Ohio State University. So, I've lived in Texas and Ohio and more recently in Illinois where I did research Argonne National Laboratory and taught at Benedictine University and in Indiana where I taught at Ivy Tech Community College in Columbus, IN.
Read Full Profile
Becky Sawasky Johnson
Senior Lecturer
Read Full Profile
Annastasia Schoettler
Lecturer
Ms. Annastasia Maria Schoettler (MATH). In 2010, Ms. Schoettler earned a B.S. in Mathematics with a Philosophy Minor from the University of Wisconsin – Parkside in her hometown of Kenosha. As a Graduate Assistance for Areas of National Need (GAANN) fellow and teaching assistant, she continued her studies at the University of Wisconsin – Milwaukee earning an M.S. in Mathematics in 2012. Her master’s thesis entitled Mathematics as a Language focused on the historical formation, symbolic representation, and grammatical structure of written mathematics. Most recently, she has taught mathematics at the college level in both Lincroft, New Jersey and the greater Rochester, New York area.
Read Full Profile
Andy Von Dissen
Lecturer
Read Full Profile
Denise Widup
Senior Lecturer - Math
Read Full Profile
Previous Next